Her paper, “Barangay (Community) Drug-Clearing Programme: A Holistic and Whole of Nation Approach in Curbing the Drug Menace in the Philippines"was recognized as one of the best papers which will be published as resource material by the UNAFEI for the Prevention of Crime and Treatment of Offenders.

Riza Soriano Ardepolla, supervisor of the Philippines' Barangay Drug Clearing Program's Mindanao cluster under the Philippine Drug Enforcement Agency (PDEA) was a 2021 participant to JICA's Knowledge Co-Creation Program - Group Region Focus (KCCP-GRF) on Crime Prevention and Criminal Justice along with other nationals from Vietnam, Thailand, Indonesia, Malaysia, Brazil, to name a few. The program's theme zeroed in on ‘preventing reoffending through multi-stakeholder approach' resonated with the Philippines' development priority of curbing illicit drug addiction, and preventing drug users from committing crimes or reoffending at the barangay level.

Her paper during the KCCP-GRF, "Barangay (Community) Drug-Clearing Programme: A Holistic and Whole of Nation Approach in Curbing the Drug Menace in the Philippines" was recognized as one of the best papers which will be published as resource material by the United Nations Asia and Far East Institute for the Prevention of Crime and Treatment of Offenders (UNAFEI). JICA sincerely admires and congratulates on her great achievement.

"Through JICA's training program, I was able to develop my idea and to share with other countries how we were able to transform the lives of the ‘least-cared surrenderers', the Persons Who Uses Drugs (PWUDs). PWUDs are given the chance to renew their lives through community-based interventions and later be reintegrated as productive citizens free from stigma of illegal drugs," shared Ardepolla. 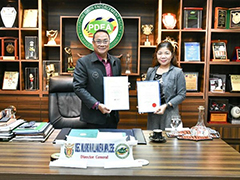 JICA's Knowledge Co-Creation Program on Crime Prevention and Criminal Justice is aligned with the Kyoto Declaration adopted at the 14th UN Congress on Crime Prevention and Criminal Justice in 2021 that stressed the rehabilitative environment in prisons and in the community towards social reintegration. The Declaration also places importance on non-custodial measures in legal systems while also taking into account social justice and rehabilitation.

The JICA Knowledge Co-Creation Program Group Region Focus is an effective instrument of JICA's Official Development Assistance (ODA) that seeks to promote participants' capacity development though mutual learning concept among participants and others. The JICA KCCP-GRF, in addition to develop the capacity of the participants themselves, can also function to enhance robust ties between the Philippines and Japan. In the Philippines, the training program has offered and continue offering various courses on many sectors such as health, nature conservation, rural development, and others.

Please refer to FAQ  or send us queries through the online form for general queries regarding JICA.