JDS Fellows are scholars who studied in premier Japanese universities under the Japanese Grant for Human Resource Development Scholarship (JDS), a component of the Government of Japan's Official Development Assistance (ODA) that aims to boost human resource development of Japan's partner countries.

Among the attendees of the said symposium were First Secretary KANNO Chihiro from the Embassy of Japan in the Philippines, Ms. Junelyn Pagunsan, Batch 8 JDS Fellow, and President of the JICA Alumni Association of the Philippines, along with JICA Philippines office representatives such as Senior Representative HIROSAWA Jin.

JDS Fellows are scholars who studied in premier Japanese universities under the Japanese Grant for Human Resource Development Scholarship (JDS), a component of the Government of Japan's Official Development Assistance (ODA) that aims to boost human resource development of Japan's partner countries like the Philippines.

"The country's development should not be based on economic growth alone but also on improvements in human capabilities," said Ms. Sheena Ya-on, a JDS Batch 16 Fellow, and currently an Economist II at the Bureau of Internal Revenue (BIR). She is a contributor who wrote Chapter 2 about economic growth through human development, which coincides with JICA's goal for Filipinos to overcome vulnerability to human security risks and to stabilize the foundation for human life and production activities. 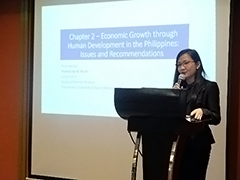 "JICA will continue to play an important role in working with the Philippines to boost human resource development, and improve the lives of people coming out of this pandemic. This knowledge-sharing event is an opportunity to learn from Filipino scholars' experiences in studying at Japanese universities and how their research can help address some of our common problems in society today, including economic recovery and sustainable development," said JICA Senior Representative HIROSAWA Jin.

The Philippine Human Development Index (HDI) was at 0.718 based on the UN Development Program report in 2020, placing the Philippines at the bottom half of 189 countries studied. The ranking is based on a country's life expectancy, years in schooling, and standard of living. The rating scale has 1 as top score. With the pandemic, the National Economic and Development Authority (NEDA) has estimated that productivity loss in human capital investment and returns is at 15.5 trillion pesos in the next 40 years.

To support human resource development in the country, the Japanese government, thru JICA, funds Filipino professionals in government to study in Japan's leading universities under JDS. Since the program's inception in 2002, Filipino scholars have had 99.3% completion rate of their studies in Japan and have returned to the Philippines with new knowledge and technical skills, and gaining promotion and key policy leadership positions in their respective agencies. They are also function as the robust bridges for much closer ties between two nations to deepen mutual understanding and respect.

Since its inception, there had been 399 Filipino JDS fellows sent to Japan whose research zeroed in on key development areas that JICA is also assisting in the Philippines, namely public policy, law, public finance, investment and trade, small and medium enterprises, urban and traffic planning, construction engineering, and environment among others.

Please refer to FAQ  or send us queries through the online form for general queries regarding JICA.